Design Transitions on Tour to Droog, NL and Fjord, UK

On 29th November 2013, we held our first official book launch event for Design Transitions at the iconic Hotel Droog in Amsterdam. Where better to have our first celebration of the book, than in the city where it all began in the first place? DesignThinkers Group were our first case study and have been avid supporters of the project ever since. We were very lucky to be joined at the launch event by a few of our contributors: Agata Jaworska from Droog, Arne Van Oosterom from DesignThinkers Group, Erik Roscam Abbing from Zilver Innovation, and Caio Werneck from Minas Gerais Office of Strategic Priorities (all the way from Brazil via Berlin, where he is currently residing). We had a great turnout with over 50 people attending from a range of public and private organisations including Frog, Up, STBY and Edenspiekermann.

A key insight from the night was that everyone wanted to know ‘what’s next for design?’. From a researcher’s viewpoint we could say that Design Transitions has captured a moment in time about how design is changing – it’s not just the design world changing the business world, both are growing up together. Through collaborations, such as that between the design and business worlds, different sectors are learning to see themselves in a different way, learning to have new conversations and understand the values they bring to each other. Here is a quick review of the evening, entitled “Leaving behind the King Arthur Syndrome”, which references Arne Van Oosterom presentation,  http://www.whatdesigncando.com/2013/12/13/leaving-behind-the-king-arthur-syndrome/#.UrB80WRdXlJ.

Just before Christmas Joyce and I hosted our second book launch event at Fjord‘s London office. London has always been at the forefront of design innovation, and in this case innovation in design practices. During the writing of the book we found that people were always looking to the UK to see where design was heading. Dr Andrea Siodmok has suggested this is because there was no market for design in the UK, and the UK had become good at selling the process of design overseas. A large number of the contributors to Design Transitions were based in the UK, and we have a particularly strong presence from the Social Design sector. We were very fortunate to have at the launch six of the contributors to the book who made up our panel discussion on the night. They were: Joanna Choukier (Uscreates), Tori Flower (We Are What We Do), Dan Harris (Fjord), Lulu Kitololo (Asilia), Professor Mike Press and Andrea Siodmok. We had a great turnout with over 50 people attending from a range of public and private organisations including notable design agencies such as Method, Sapient Nitro and Firefly Millward Brown; multinational organisation such as Virgin Media, BT and Intel; governmental organisations like the Ministry of Justice Digital Services; representatives from think tanks like Policy Connect; and universities such as Kingston University, Brighton University and Central Saint Martins.  The full video of the panel conversations can be accessed on vimeo. https://vimeo.com/88438782.

The event came at an interesting time for Fjord, as the company had just been bought in May 2014 by Accenture and they were finding new ways of working within a new culture and language. A key insight from this evening of conversations was that, as designers move into new spaces, they have more influence but also more responsibility. In these changing times the business model of design is shifting and reshaping.

Thank you to our friends and supporters for helping us celebrate two very special nights.  Marieke van Dijk from Design Thinkers Group thank you so much for making the banners for the Droog event – it was a lovely surprise! It would be have been great to have Lauren Tan our co-author with us, but as she just welcomed her new baby daughter Lily it wasn’t possible on this occasion – congratulations to Lauren and her family on their exciting new arrival! 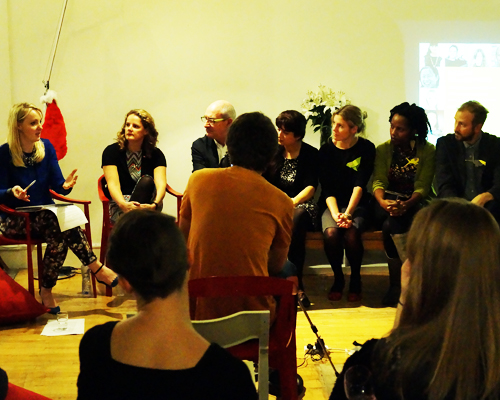